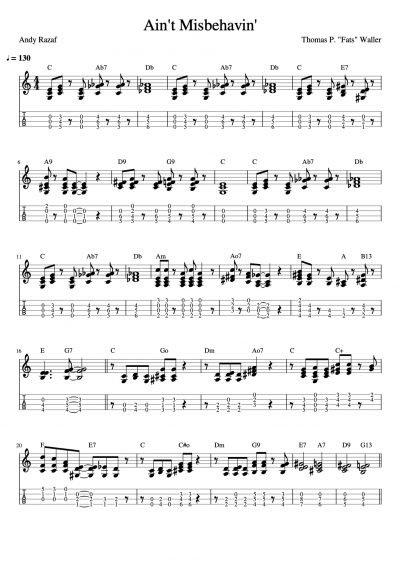 You are purchasing the tablature arrangement by Steven Strauss and an mp3 file of the midi playback of the arrangement.

There are no reviews yet.

Only logged in customers who have purchased this product may leave a review.

The song was first performed at the premiere of Connie's Hot Chocolates in Harlem at Connie's Inn as an opening song by Paul Bass and Margaret Simms, and repeated later in the musical by Russell Wooding's Hallelujah Singers. Connie's Hot Chocolates was transferred to the Hudson Theatre on Broadway during June 1929, where it was renamed to Hot Chocolates and where Louis Armstrong became the orchestra director. The script also required Armstrong to play "Ain't Misbehavin'" in a trumpet solo, and although this was initially slated only to be a reprise of the opening song, Armstrong's performance was so well received that the trumpeter was asked to climb out of the orchestra pit and play the piece on stage. As noted by Thomas Brothers in his book Louis Armstrong: Master of Modernism, Armstrong was first taught "Ain't Misbehavin'" by Waller himself, "woodshedding" it until he could "play all around it"; he cherished it "because it was 'one of those songs you could cut loose and swing with.'"[3]

Your cart is currently empty.